Nadia Anjuman’s poetry startles. When considered in conjunction with the knowledge of her young age, it provokes something deeper, less easily pinned down. Her poems are in turns playful, hopeful, devout, despondent. She leans on imagery of the garden and the stars, as well as the body. Despite the difficulty of her life and the content of the poems, one of her most remarkable and consistent habits is her hopefulness. Many of Anjuman’s pieces show her coaxing herself into optimism and rationality.

As a teenager in Herat, Nadia Anjuman attended the Golden Needle School. Under the guise of practicing needlepoint (a pastime approved by the Taliban government), a group of women gathered to meet and discuss literature with local professors. In 2001, with Afghanistan’s liberation from the Taliban, Anjuman began attending Herat University and soon published a book of poetry entitled Gul-e-dodi (Dark Flower). In Gul-e-dodi, Anjuman portrayed the difficult realities of her life and thus her generation of Afghani women, those with few rights who had been raised during the reign of a violent and oppressive governmental power. Her readership was not limited to Afghanistan—Gul-e-dodi found readers in Iran, Pakistan, and beyond. As a result of her writing, Anjuman was awarded scholarships and fellowships. She continued to write poetry despite the objections of her husband and his family, and she was set to publish a second volume of poetry in 2006 entitled Yek Sàbad Délhoreh (An Abundance of Worry).

Anjuman was killed in November of 2005 at the age of twenty-five. While the particulars of her death remain unclear, it appears that it was the result of a physical struggle between Anjuman and her husband. In 2007, Anjuman’s complete works (entitled Divâne Sorudehâye Nadia Anjoman: The Book of Poems of Nadia Anjuman) were published by the Iranian Burnt Books Foundation. Gul-e-dodi has been reprinted three times and sold over three thousand copies. As I continue to work on translating Anjuman’s poems—sending them out for publication, applying for grants, talking to people about her—I hope to avoid trapping her in the common tropes of the young genius, the dead woman writer, and/or the oppressed Afghani woman. The details of her life do not eclipse the brilliance of her verse. 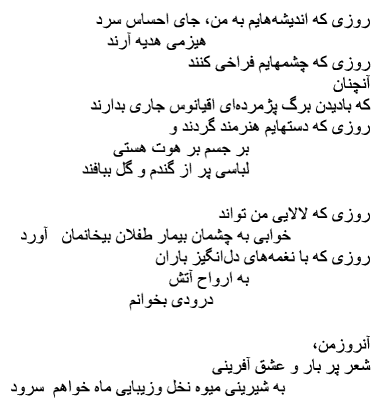 One day my thoughts, instead of a chill

One day my eyes will be wide open

in seeing the shrunken leaves of the ocean, they continue flowing

One day my hands will become weavers

and upon life’s wasteland of a body

spin a gown with wheat and flowers

One day a lullaby

will bring sleep to the weary eyes of homeless children

One day I will sing praise

to the spirit of fire

with soothing songs of rain

I will write a rich and exalting poem 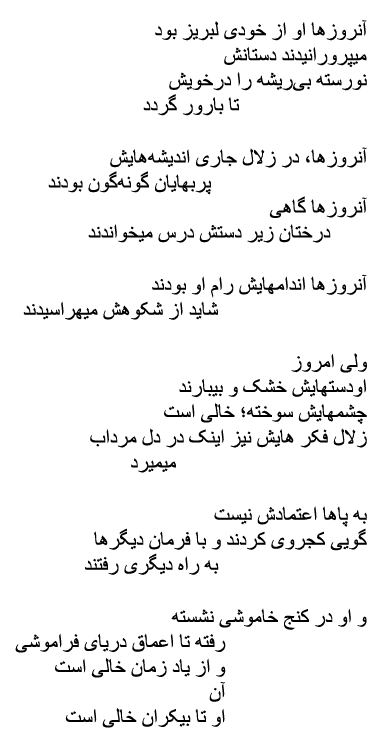 Once she was filled with the familiar

Her hands planted the rootless sprig

so it would grow

Once, in the bright spring of her mind

her hand tamed the trees

Once even her guts were obedient

perhaps they feared her power

her hands are wasted and idle

her bright thoughts are buried in a swamp

She distrusts even her feet

taking her where she doesn’t want to go

She sits in a corner of quiet

lost in a sea of darkness

emptied of the thought of time 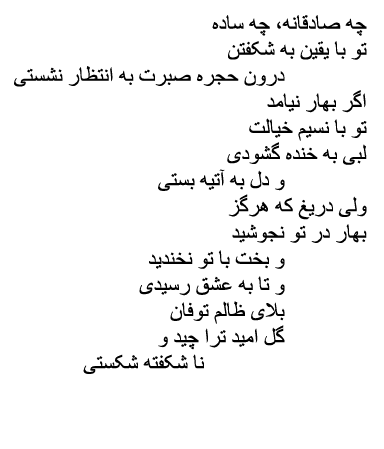 How sincere, how pure

You, with such faith in your blossoming

ready in your chamber of patience

Spring did not come

and you with your airy dreams

and looked with your heart toward the future

and luck didn’t smile on you

and when you found love

the harsh trial of that storm

plucked your bud of hope and

and you snapped before opening 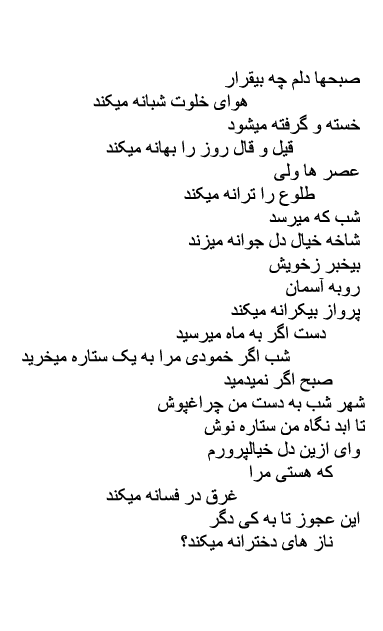 Each morning my heart is restless –

it longs for night’s solitude

peeved by the day

And yet in the afternoon

it sings for sunrise

the branch of my heart’s fantasy grows

(If my hand reached the moon

If the night bought my relief from a star

If the sun did not rise…

I would cover the city of night with lights

you drown my days

How long will this old woman of a heart