Half of what was visible was sliding. There were dancers near the beacons and footsteps of light. Everyone was asleep. Out from a mass of trees where nothing could be seen but shadow—the shadow that was walking, detaching itself from the leaves—little by little a wing flew free, shaking off the moon with a quick and muffled beat. The air kept completely still. The slippery pavement would bear no more audacity, but it was right in the middle of town, in the dead of night, the sky fastening itself to the earth with its rows of houses. Passersby had scaled another world that they gazed at with a smile. But there was no way of knowing whether they would stay there any longer or go fall at last into the other direction of the little street.

If I laughed it wasn’t because of the bright and joyful world passing before me. Heads leaning forward or facing straight ahead scare me, and my laugh would have turned into a grimace. Running legs tremble and heavy feet misstep. I wasn’t laughing at the world passing before me—I laughed because I was alone, later on, in the country, standing in front of the calm enormous forest under voices that answered each other in the drowsy air.

No doubt about it; no other word could have better expressed his joy. Everyone who was waiting against the wall trembled when he said it. There was a large cloud in the middle—an enormous head—and the others stared at the slightest marks of footsteps on the path. Yet there was nothing there, and it was becoming difficult to know in the silence what attitude to strike. Behind the fence a train went by, blurring the lines that held the scene upright. Then everything disappeared, mingled with the unbroken sound of rain, lost blood, thunder, or the mechanical words that the most important of these characters said.

END_OF_DOCUMENT_TOKEN_TO_BE_REPLACED 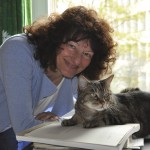 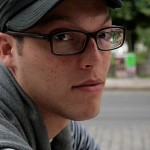 Donata Berra’s work came to me by chance. I had just moved to Switzerland for love. I had just begun studying at the University of Berne, where Donata teaches. I had wandered, at random, into the Romance Languages building, bumped into a nice man in the Italian department who, I would later discover, was a poet, too, and found myself enrolling in an Italian course. Course: Advanced Italian Syntax and Grammar. Instructor: D. Berra/Staff.

After two weeks, longing already for literature to complement the linguistic focus of the course, I asked Donata if she could make recommendations of Italian poets to read in addition to the course work. She obliged, indicating that she was actually a passionate reader of poetry. She told me she loved many of the same English-language poets I loved, though she had only read them in translation. She told me that it would be her pleasure to help; in fact, she would bring me her personal copies of the books she recommended so I wouldn’t have to navigate the library stacks. She never mentioned she was a poet.

Each week, Donata brought me books, and each week, I took them home, devoured them, and gave them back to her in class, where we discussed compound reflexive pronouns and the passato remoto.  To the final class, Donata brought a thin, red collection of poetry, which lay, face down, on the desk next to her. I was surprised: I didn’t know that I would see her again after this class and therefore hadn’t been expecting a book. After the lesson, she handed me the collection, her own, with humility and graciousness, saying only that she hoped I liked it.

I say with embarrassment that A memoria di mare /As the Sea Remembers sat on my bookshelf for two years before I opened it purposefully. I discovered a collection marked by a palpable sensuality of language, arresting imagery, and a tremendous sensitivity to the human condition—to the great tragedies that unite us, and to the nuances of even our smallest interactions. Moved, without thinking, I found myself translating Donata’s most powerful poems. I deliberately stayed as literal in my translations as possible, wanting to preserve, and to transmit, the clarity of voice, scene, and affect in these poems.

the games the cast nets the gazes the complacency
the long, tiresome staging of ourselves

only our voice is calm,
it says – in our deepest selves,

Come, rest, I want to caress you with the dark,

dark on your skin, with both hands I caress you

in the dark that blinds the voice.