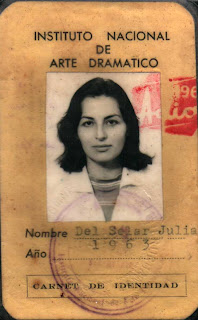 In 2009, tired of hearing me complain about my translation projects constantly being derailed by various copyright issues, my friend Renato Gómez (poet and psych-rock musician from Peru, currently a resident of Barcelona) gave me a small pile of books he’d been involved in publishing back in Perú. He said something like, “Here, shut up and translate these. All the writers are dead, their heirs are chill and they just want the work out there.”

The first thing that caught my eye was a tiny little book, bright blue cover, called Gesto, by Julia Ferrer. It caught my attention because of the color, yes, and also (I sheepishly confess) because the photographs of her revealed one of the most beautiful women I have ever seen. The quality of the poems, however, soon put such things far out of mind.

I know almost nothing about Julia Ferrer. She was born in Lima in 1925, and died in 1995. She taught theater in universities and had a very hard time publishing, seeing only two books printed in her lifetime, in 1958 and 1966. Gesto, which contains excerpts from both books as well as material drawn from magazines and unpublished manuscripts, came out in 2004, in an edition of 309 copies. In a way, she barely existed as a poet, lacking the kind of official status granted by a growing shelf of publications, regular public readings, invitations to conferences and so on. Presumably also lacking the odd way such things have of convincing the people in one’s life that the habit of writing is a legitimate pursuit, as opposed to a waste of time better spent on other things. On first read, this seemed rather sad to me, this liminal status, but after two or three trips through the book it became something I found perfectly suited her poetry.

There is a quietness in Ferrer’s work which I hoped to make my translation reflect. I used a lowercase “i” instead of the usual capital vowel meaning “self,” and consistently chose the shortest, simplest English word from among the acceptable options. Ferrer had a way of using repetition to produce rhythm through the length of a poem, and a reliance on an idiosyncratic kind of romanticism in her images.

The question of why Ferrer lived such a marginal life as a writer is an open one. It may well have been by choice. She may have simply not known the right people in the Perú of her era. It almost certainly had something to do with the fact that she was a woman, but I suspect that the nature of her work had a lot to do with it, too. She’s not exactly avant-garde, but also sort of is, in addition to being a bit of a Romantic, with a touch of surrealism. It remains as difficult to pin Julia Ferrer down as a poet as it is to get one’s head around any one of her poems, which remain, somehow, slightly inexplicable. A reader or a translator can literally disassemble her work looking for that which makes it function as it does, and find nothing, no single technique, nothing in the language itself that adds up to the effect of the whole. Her poems are nearly always significantly greater than the sum of their parts. In the end, it is most likely this which is her great strength as a poet.

END_OF_DOCUMENT_TOKEN_TO_BE_REPLACED 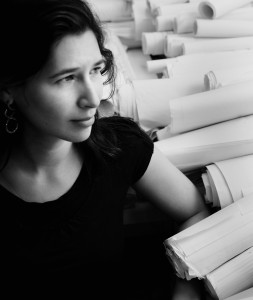 they are still asleep their throats are sore because

they have a cold and they want more and more souvlaki

(and another one please) their hearts ache

when they leave places they love

(like all of ours) their kidneys sometimes hurt they swear

and they are grumpy it hurts them bad when they have

their monthly periods they never

go bald they are playful and dancing

biting their fingers and lips they have bad

nerves darkgreybrown color of skin in the summer

they wear flip-flops and a tent they have very

they drink ouzo until they roll on the floor they chase

off flies from their legs they kill mosquitoes and give birth.

END_OF_DOCUMENT_TOKEN_TO_BE_REPLACED 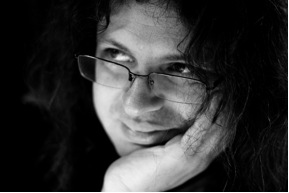 The store is oddly named considering it’s the only Russian-language bookstore in Manhattan (though there are a few in Brooklyn’s Brighton Beach). It reminds me of every library in every Russian home (or formerly communal apartment, rather) I’ve ever visited: dark brown bookshelves covering all walls from floor to ceiling, stacked with aging books, some piled on top of one another to make space. Russian Bookstore #21 is filled with the classics, volume after volume of full collections by Chekhov and Tolstoy, sprinkled with contemporary works and works in translation. The design of Russian books is mostly tacky, and the paper stock of older books published in the Soviet Union yellows and flakes rather quickly. The wall décor in the store complements the merchandise: kitschy fading art posters and a black and white enlarged photo of several men, including Vladimir Lenin. END_OF_DOCUMENT_TOKEN_TO_BE_REPLACED